I started making myself a corner-to-corner blanket recently. I wanted another afghan to put on the bed in the winter. But I had to put that sucker into hibernation because I just realized two stark realities: 1. It’s November already. 2. I have tons of Christmas gifts to crochet. So even though the blanket was starting to look pretty good, into the hibernate corner it went. 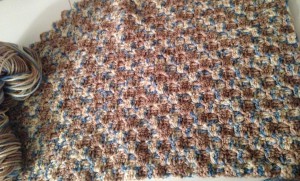 But I’ve had some recent progress too. I finished a scarf I was making for my facialist, Karla: 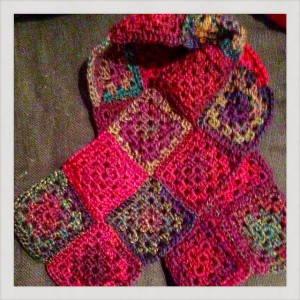 It was really simple, since it’s basically two rows of alternating granny squares, worked up in Lion Unique, which is one of my all-time favorite yarns. I was really  happy to tuck it away in its gift bag, all ready to give to her in December.

Next, I started work on a scarf I decided to make for my primary healthcare provider because I LOVE HER (more on that later). But then I realized I work with this lady who’s pregnant and will be going on maternity leave soon. We all know what a pregnant lady means — an excuse to make a baby blanket! And what do you know, I had skeins of baby yarn just sitting around waiting. So I started on a pattern I’d been waiting to try. It’s taking a bit more time than I planned, but it’s working up nicely: 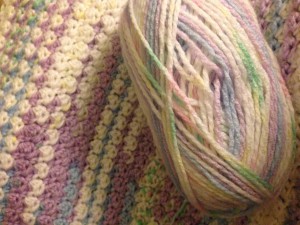 Hope I can finish it before her last day.

So I completed a project near the end of October when I had a laparoscopic cholecystectomy, i.e. I had my gallbladder removed. It was outpatient surgery and, to my surprise, it was the most positive healthcare experience I’ve ever had (even though it was expensive*). The surgery center I went to was SO NICE. It felt more like a spa than a hospital, but not extravagantly so. Recovery was easy-peasy. Seriously, I felt fine like two days later, once the grogginess from general anesthesia wore off.

My only complaint is numbness in my lower lip, which I discovered via Google is an uncommon-but-not-unheard-of side effect of general anesthesia, caused by nerve damage from the mask or the intubation, and usually wearing off in a few weeks. I hope so! Because right now my lower lip has the feeling you get when the novocaine is starting to wear off – somewhere between numb, tingly, and just a tiny bit painful. It’s irritating, more than anything else.

So what about the work in progress? Well…when they did my ultrasound to visualize my gallstone they also noticed that I have cysts on my spleen. What does it mean? Nobody really knows. I’m not symptomatic, my blood work all looks normal, and it’s not causing any discomfort. However, the cystic growths are large enough that they represent a serious risk of bursting and causing internal bleeding if I ever have any serious abdominal trauma (like a car accident, bad fall, or superhero costume malfunction). After getting an MRI, and discussing it with my surgeon and my provider (the one I’m making the scarf for), I’m tentatively planning to have the surgery to remove my spleen. The whole spleen??? Yeah, I know. It’s drastic, but: 1. you can live without a spleen, it just puts your immune system at slightly higher risk; 2. they can do it laparoscopically like the gall bladder surgery (and I’m hoping and praying outpatient, though probably not); and most important, 3. there are treatments to try to reduce or remove the cysts themselves, but generally those types of efforts are not successful, and most cysts end up growing back.

So that’s where I am. Luckily my last surgery was an easy recovery and I didn’t miss much work at all (day off the day of surgery and the day after, then a weekend, then telecommuting the following Monday and back in the office by the end of the week). I’m hoping the splenectomy will be a similar experience.

And while I’m off my feet – more time for crochet projects! WINNING!!!

*I had to meet my individual deductible, then pay 20% coinsurance, which as you can imagine was quite pricy. But on the positive side, it’s put me near my out-of-pocket limit for the year, so if I have my other surgery before 12/31, it’s likely most of my expenses will be covered at 100% instead of 80%. I can’t believe that calculations like this now have to figure into my healthcare decisions – it’s a rude awakening after years of HMO-style “pay your premium and everything is covered” plans. But this, alas, is the world we live in.