I prefer to think of it as an EVENT, actually. TA-DAH!!

THE SPLEEN is still with me. I had the cyst aspirated (benign) then underwent a CT Scan two months later to see if it was growing back (it wasn’t). I am done thinking about my spleen for the foreseeable future!

ICLOUD PHOTO STREAM is still crap, and I got tired of the frustration, so I am using a different solution. I upgraded my Dropbox account, and I am using their new feature that allows you to sync your camera photos across devices. It works GREAT. If you would like to try a paid Dropbox account (the basic account is free and awesome, but extra space is also awesome), please use this referral link (Dropbox goodness) and you’ll get an extra 500mb free! They have a cool new photo organizing/viewing/sharing app too (Carousel) and it’s pretty awesome. That’s a whole lot of awesome in one paragraph!

MY OLD IPAD has moved on to my daughter’s custody. I think she has installed approximately 637 free games on it now. I bought myself a new iPad Mini 3, and if you ask why, I’ll say “because I deserve it!” As far as I know, the “other” storage issue is still a problem, but since my new iPad has like 128gb of storage, it will be a long, long time before I ever notice it. I also got an iPhone 6, even though I said I wasn’t going to, and I don’t regret it at all. It’s too big, in my opinion, but it’s not uncomfortably big and I actually like that it’s much thinner than the previous models. I sort of miss the square edges but not a lot. Having TouchID is life-changing – seriously.

I DYED MY HAIR PURPLE and I really liked it. Then I got a serious undercut pixie. It’s a little less purple now than it was, but it’s still purple. Am I too old for these shenanigans? HELL TO THE NO. 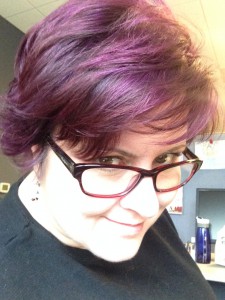 After the stress of the holidays, I had lots of time to start new projects and make things just for me.

Wreath I made myself a wreath using a bunch of leftover yarn. I got this idea from Attic24, which is a fantastic blog where an English lady covers her life in crochet and designs beautiful patterns and then posts gorgeous photos of everything. Seriously, she’s like a one-woman Pinterest. Here’s the wreath, which I hung on my office door: 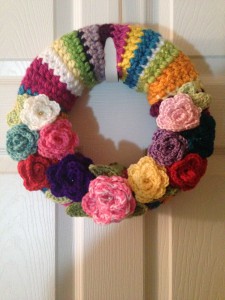 It makes me so happy every time I see it.

Slouch Hat I made myself this hat from the first pattern I’ve ever paid for. It’s really nice, although it came out a little big, so I’m going to make another one and size it down a bit. Still a really pretty hat, and it wasn’t difficult at all. 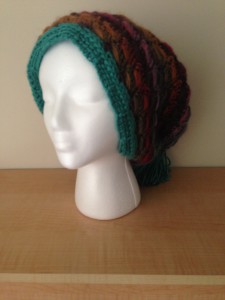 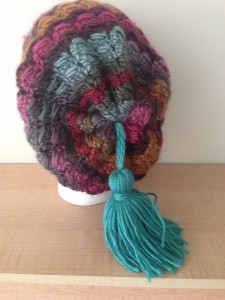 (And I also bought that creepy mannequin head to model my hats from now on!)

CAL #1 I joined a “mystery” crochet-along, and let me tell you that this was a mistake. If you’re going to commit to a project, make damn sure it’s going to be something you like. If you don’t know what the end product is going to look like, make sure the designer does things that match your taste. Lesson learned! This CAL was sponsored by Yarnspirations (Caron’s website) and The Crochet Crowd. I hated the end result. SOOOO ugly. And too small to really be used as a blanket. I mean, here’s just a corner of this thing: 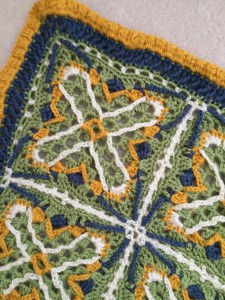 Puke, am I right? And that’s after I toned it down (it had these obscene puffy centerpieces that looked like vulva, which I ripped off and replaced with something simpler). I had no idea what the hell I was going to do with this thing. I was so disgusted, I didn’t even do the last week’s clue (two more rows on the border). I just couldn’t stand it. The whole thing was mired in controversy – I was far from the only participant who was disappointed in the project.

But I found someone who loves it: 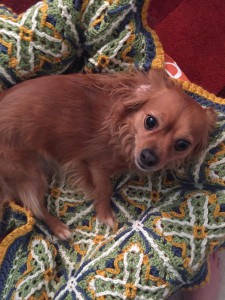 It’s soft and it smells like me, and it’s the perfect size to line his dog bed. WIN.

CAL #2 As I was reaching the end of the Fugly CAL, I heard about another one called Sophie’s Universe. It was more than halfway finished, so I could see how the project looked, and I fell in love. So I started one for myself: 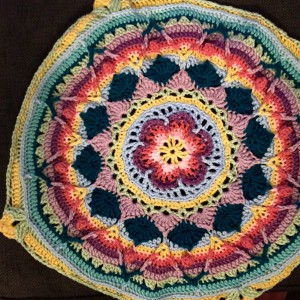 It’s much bigger now and only about halfway done; the official CAL has ended but I’m continuing. In fact, I loved it so much I stopped my own and made another for my mother-in-law for Mother’s Day: 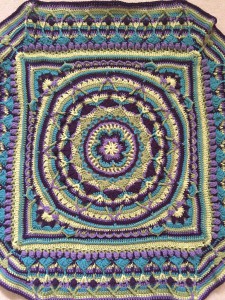 It’s lapghan-sized, perfect for her to take with her to dialysis.

And that’s what I’ve been up to!