We have a strange quilt on our king-sized bed in the Master Bedroom. Oh, it doesn’t really look all that strange, to most people. I mean, it’s your standard-size, standard-weight quilt. But the colors…the colors are IMPOSSIBLE to match with sheets, throw pillows etc.

The quilt has several sections of different patterns in shades of blue and gray. I bought it at Macy’s, way back when I still shopped at Macy’s. I’ve never been able to find sheets, pillowcases, throw pillows, shams, etc. that really match it. It looks simple enough, but the colors are just a little “off,” such that every blue sheet or pillowcase I buy just doesn’t quite match. I find myself sticking to white, gray, and the occasional navy blue. Here’s a picture of three of the four patterns that make up the quilt: 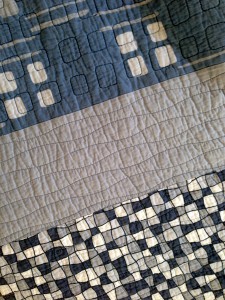 So anyway, let me assure you first of all that I don’t spend hours obsessing over this or anything. Sure, I’m writing a blog post about it, but that’s only as background to explain why I made not one, but TWO pillows to match this quilt. First, I made this square one: 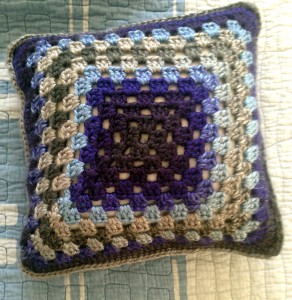 It’s a square throw pillow that I made with roughly two balls of Lion Brand Unique in “Moonshadows” and a 12″ pillow form. It’s basically two large granny squares made with an 8mm hook that I single-crocheted together over the pillow. Simple, but effective: it’s soft and it looks nice on the quilt. Since I had enough Unique to make both sides, the pillow looks really different on each side. Here’s the other side: 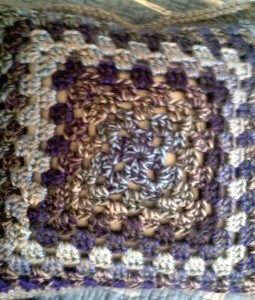 Gosh I love that yarn.

I decided I needed another throw pillow, a bit larger this time, so I got a 12″x18″ form, and used a pattern on Ravelry for a rectangular granny square afghan. I simply made a smaller starting chain, and then did just enough rounds to cover one side of the pillow. And I think I switched to a 6.5mm hook.

I needed a lot of yarn! I used just over one ball to make the rectangle. Since I didn’t have more of the Moonshadows and I didn’t feel like buying any, I used Red Heart Super Saver Chunky in navy blue to make the back side, and basically used the whole skein! (It’s not a great yarn – not very soft. Would be nice for a rug, though – it’s very sturdy.) So then I had to find a ball of navy blue yarn to single crochet the two pieces together (and add a double-crochet border to the front, since it was just a bit too small). I didn’t have any bulky yarn in navy, so I used two strands of worsted weight. Holy cow, that got more complicated than I planned! But here’s how it turned out: 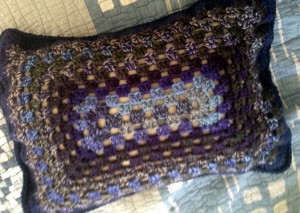 And here they both are, hanging out: 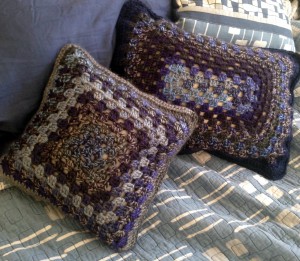 And finally, here’s a picture of my dog, who watched me the whole time I was taking these pictures with an expression on his face that said, “And you people think I’m crazy when I lick my own butt…” 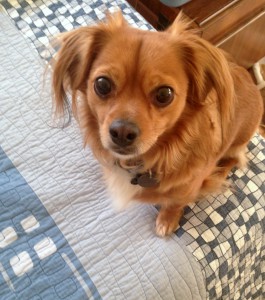 I’m happy with how both pillows look, and they definitely make the bed more cozy. But I think I’m done making pillows for a while. It’s time to move on to Christmas gifts – yes, it’s that time of year already! I’ve already got a scarf, afghan, and set of placemats to finish by the beginning of December.

Also, I’m having my gallbladder removed next week. It’s outpatient surgery, and while I recover at home I’ll be doing a lot of crocheting while I trip on percocet. 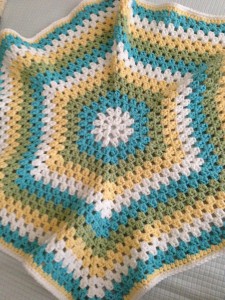 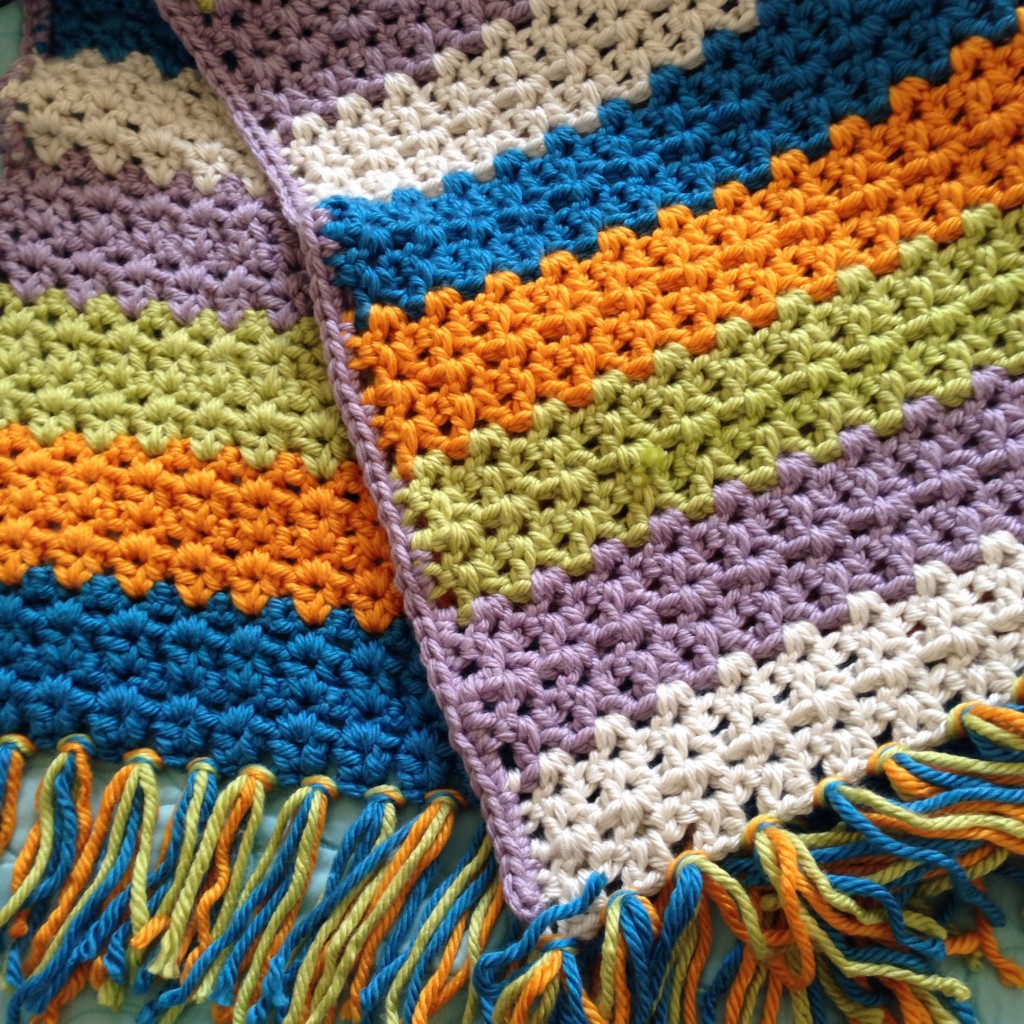 Monthly “box” subscriptions are all the rage now. You pay some relatively moderate fixed price, and every month you get a box of items or samples or whatever related to your interest. I used to subscribe to Birchbox, which was supposed to mostly be makeup/skincare/fragrance, or so I thought. I cancelled when they sent me laundry detergent. LAUNDRY DETERGENT! Listen, Birchbox, I don’t need you to remind me how I spend every damn weekend.

About the only subscriptions I’ve been happy with are Sock Panda and Lootcrate. I heartily recommend them. In fact, I gave a year of Sock Panda to my best friend for Xmas last year, because they’re just that awesome. Subscribe here and tell them groovymarlin “at” gmail “dot” com sent you. (Figure out how to make that into a real email address. You can do it!)

Here’s some of the awesome stuff I’ve gotten in past crates: 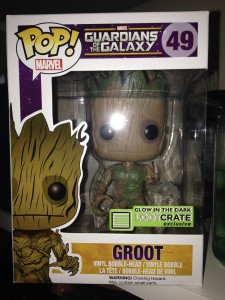 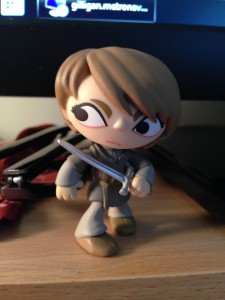 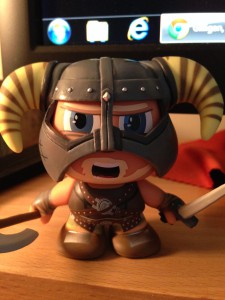 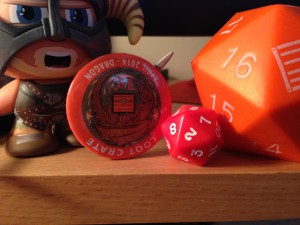 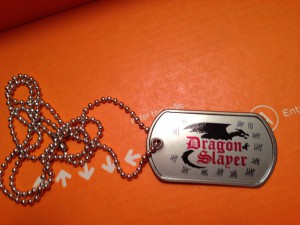 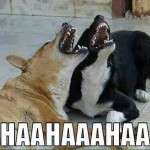 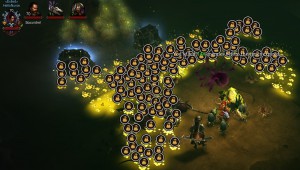