Whew, that took a while, didn’t it?

Is there anything more annoying than the way that the iCloud photo stream works (or in this case, doesn’t work) with Windows 7? OK, yeah, there are probably things that are more annoying but at this particular moment, that’s on the top of my list. It just stops updating…photos show up in my photo stream on my iPhone, my iPad, but they sync perfectly to my Photo Stream folder on my Windows PC for a while, and then they just…stop. Usually, I have to reboot, or turn off Photo Stream and then turn it back on, and sometimes one of those things works, although there are some photos that just won’t EVER synch to the PC. Stupidly annoying. There are tons of posts about it on the Apple support boards.

It’s like that mysterious “OTHER” storage usage on my iPad. Turns out, it’s caused by renting movies or shows from iTunes. The Apple video app will download the whole shebang while you’re streaming a movie, and it takes up a ton of storage on the device, which is listed as “Other” when you’re syncing and looking at usage. The problem is, when you’re done, it doesn’t release that storage. It just sits there. The workaround is to install a new app or something like that, then it suddenly frees it up. Tellingly, you can stream from Netflix and Amazon Prime and this problem does not happen, it’s just in Apple’s shitty video app. Here’s an excellent, detailed blog post that explains the whole problem quite clearly.

I don’t consider myself a fangirl of either Windows or Apple, I mean everything has its place and I’m a consumer of multiple Windows and Apple devices (as well as at least one Android thingamabob). But Apple’s native apps are just such a nightmare lately. Don’t even get me started on the bloated obscenity that iTunes has become. And then there’s that whole thing where the new “Health” app lets you can track your intake or blood content of various obscure chemicals, but doesn’t offer a single option for tracking menstrual cycles, fertility, etc. LAME, APPLE.

So there’s the rant out of the way, let’s get on to the fun stuff: projects! I’m going to try to go back and show you everything I made for Christmas gifts this year. If I can remember them all. I was a busy little bee!

I bought some cotton yarn last summer and made my Dad some coasters, which he really liked. He requested placemats that matched, so I made him four: 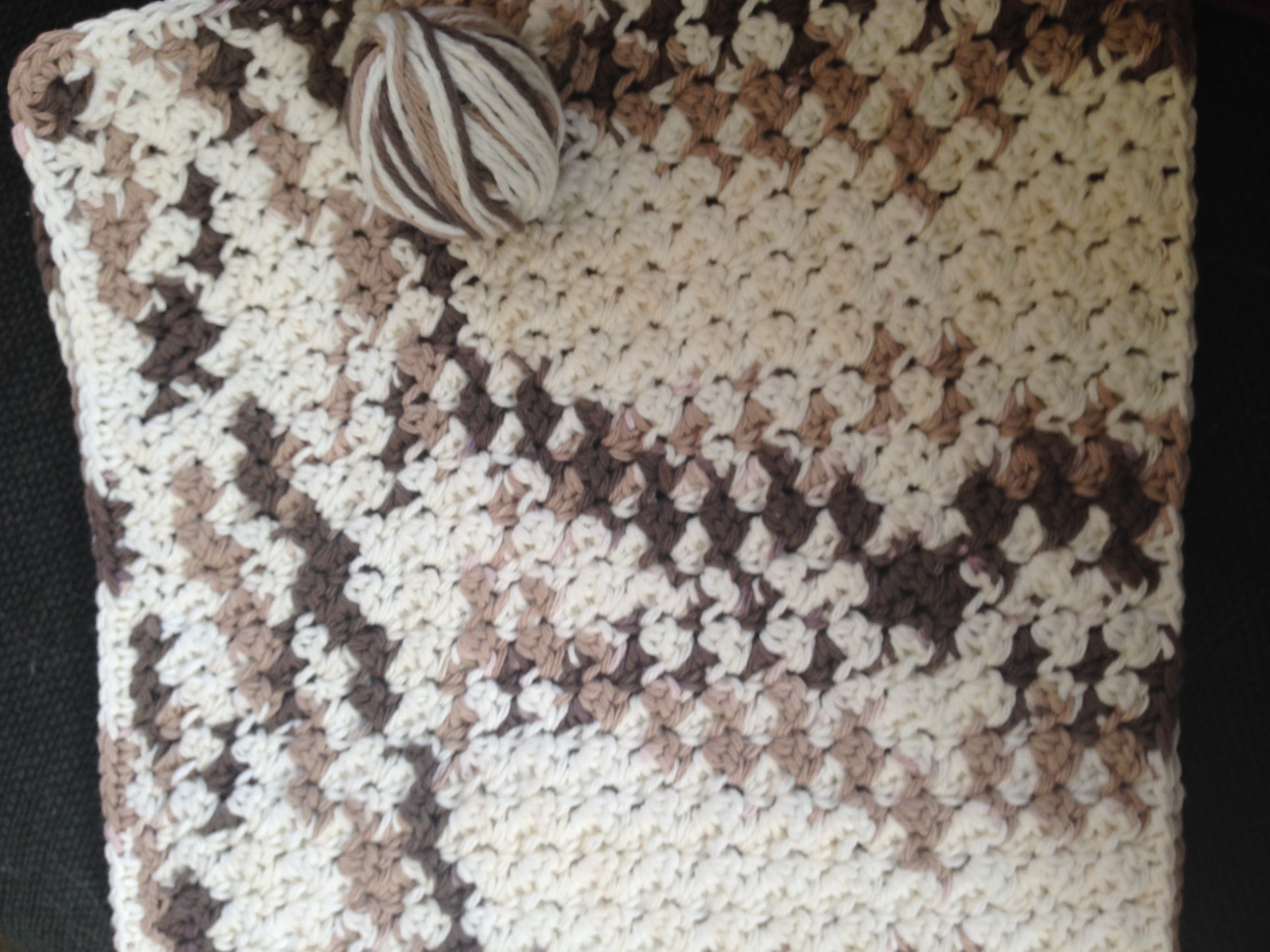 I was trying for six, but it was getting close to Christmas. I did promise him I’d make two more and send them on this month or next. It was an easy pattern but it did get boring making the same thing over and over!

I made my sister a “lapghan” to use when she’s watching TV. Since she lost so much weight, she’s always cold! 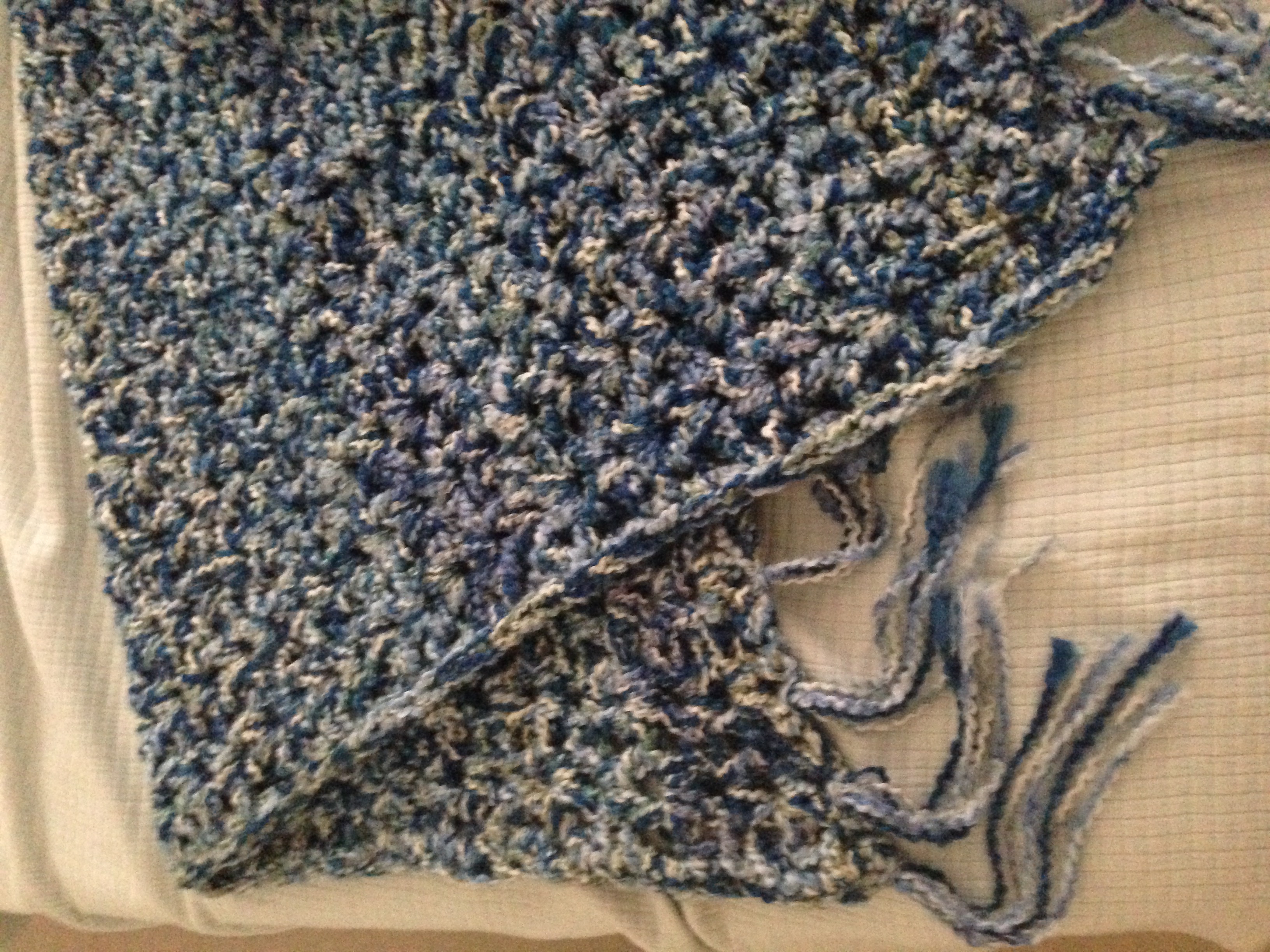 I used fuzzy yarn (Lion Brand Homespun) in her favorite shades. It came out nice, and it’s quite warm!

I had some funky Red Heart yarn called Stellar, which I thought would make pretty gifts for my nieces. It’s chunky and soft with a little bit of glittery thread woven through it. I made them some hats, here I am modeling one of them: 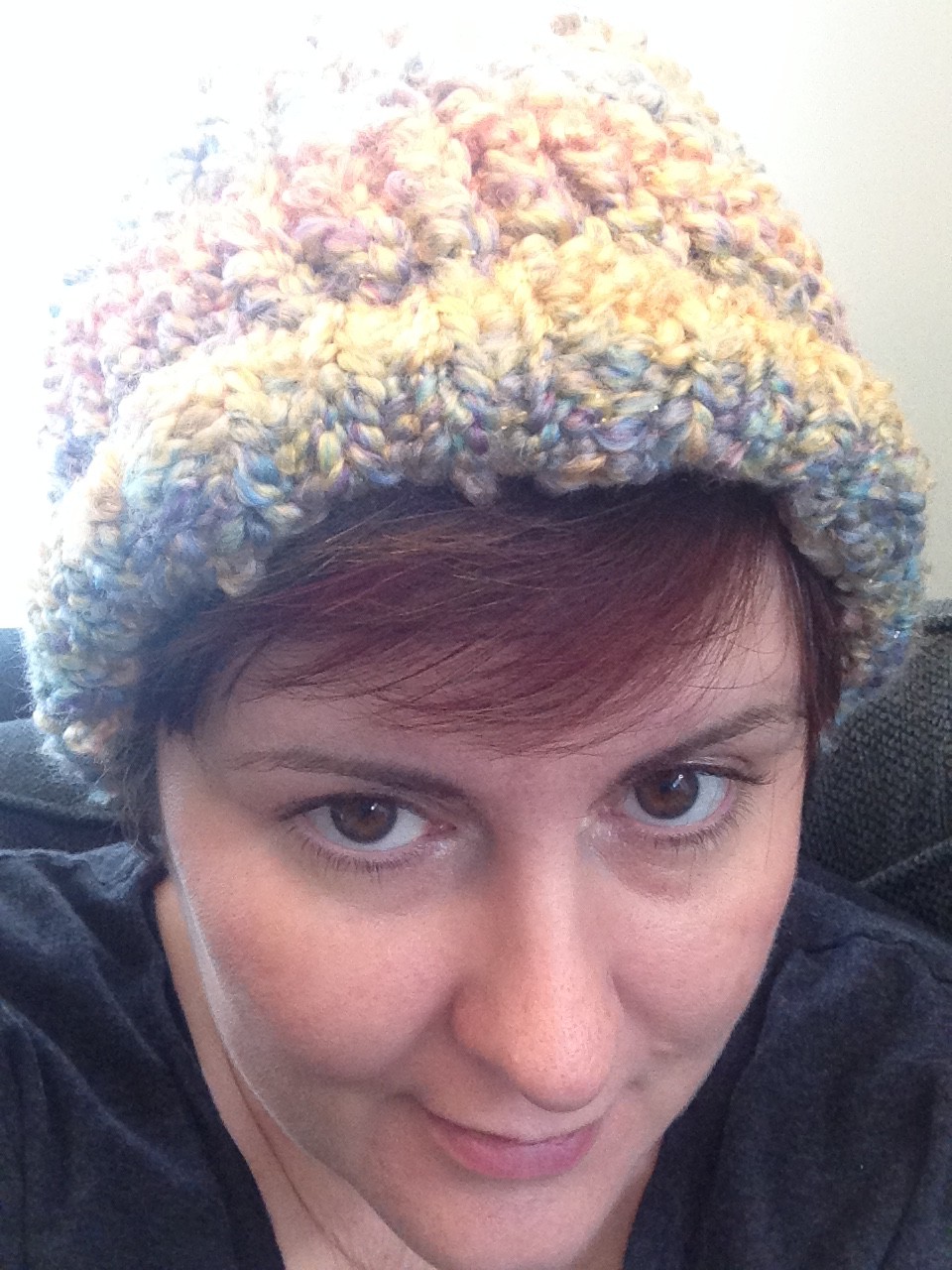 And I also made Rob a hat, specifically a camo hat for hunting: 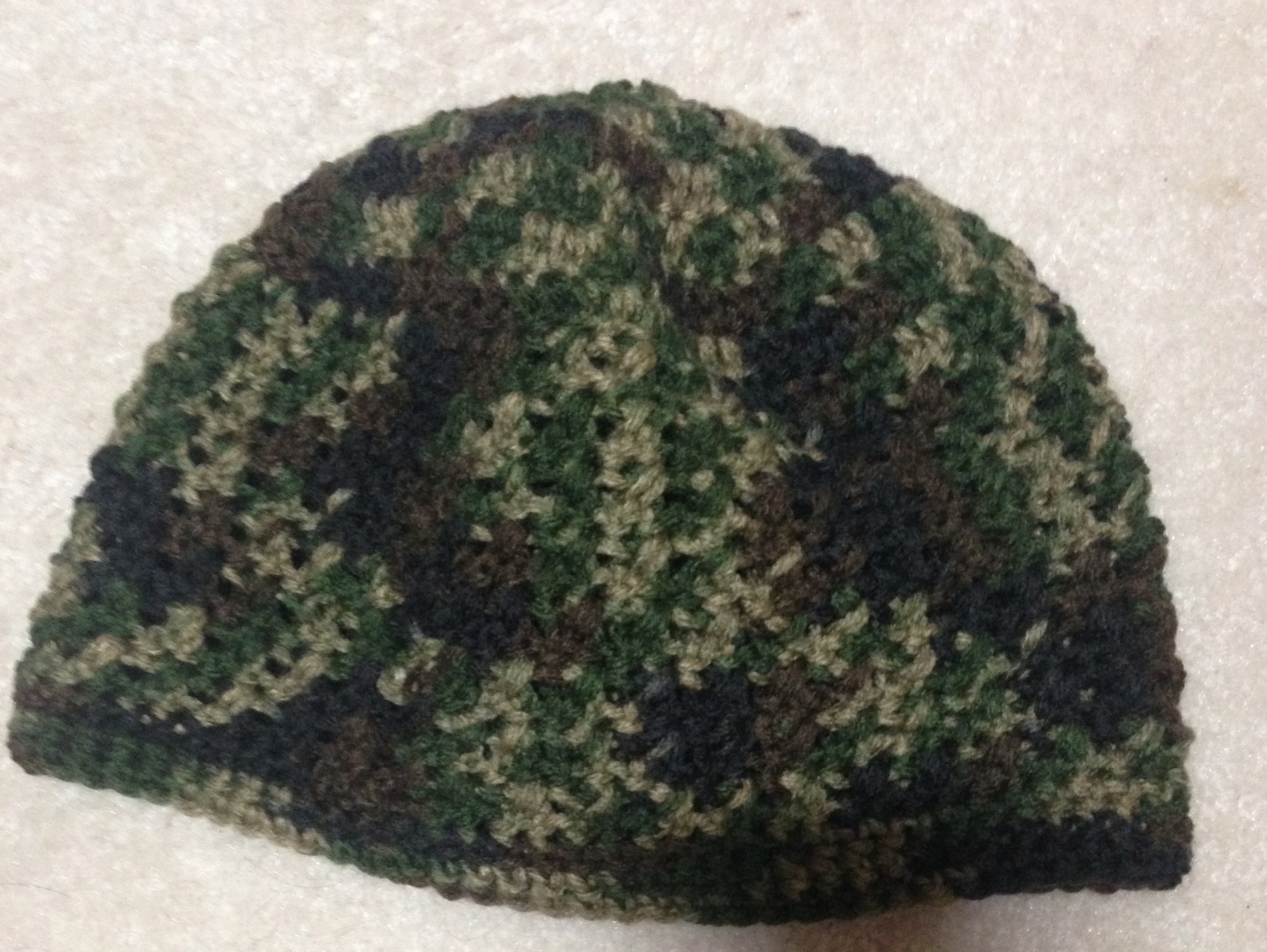 This is made out of the absolute most el-cheapo yarn in the world, aka Red Heart Super Saver. Gotta love that it actually comes in a camo pattern! He loved it! Then he asked me to make him a scarf, but he requested OSU colors. I used some chunky yarn I had lying around to make a color-block look. Here he is modeling the result: 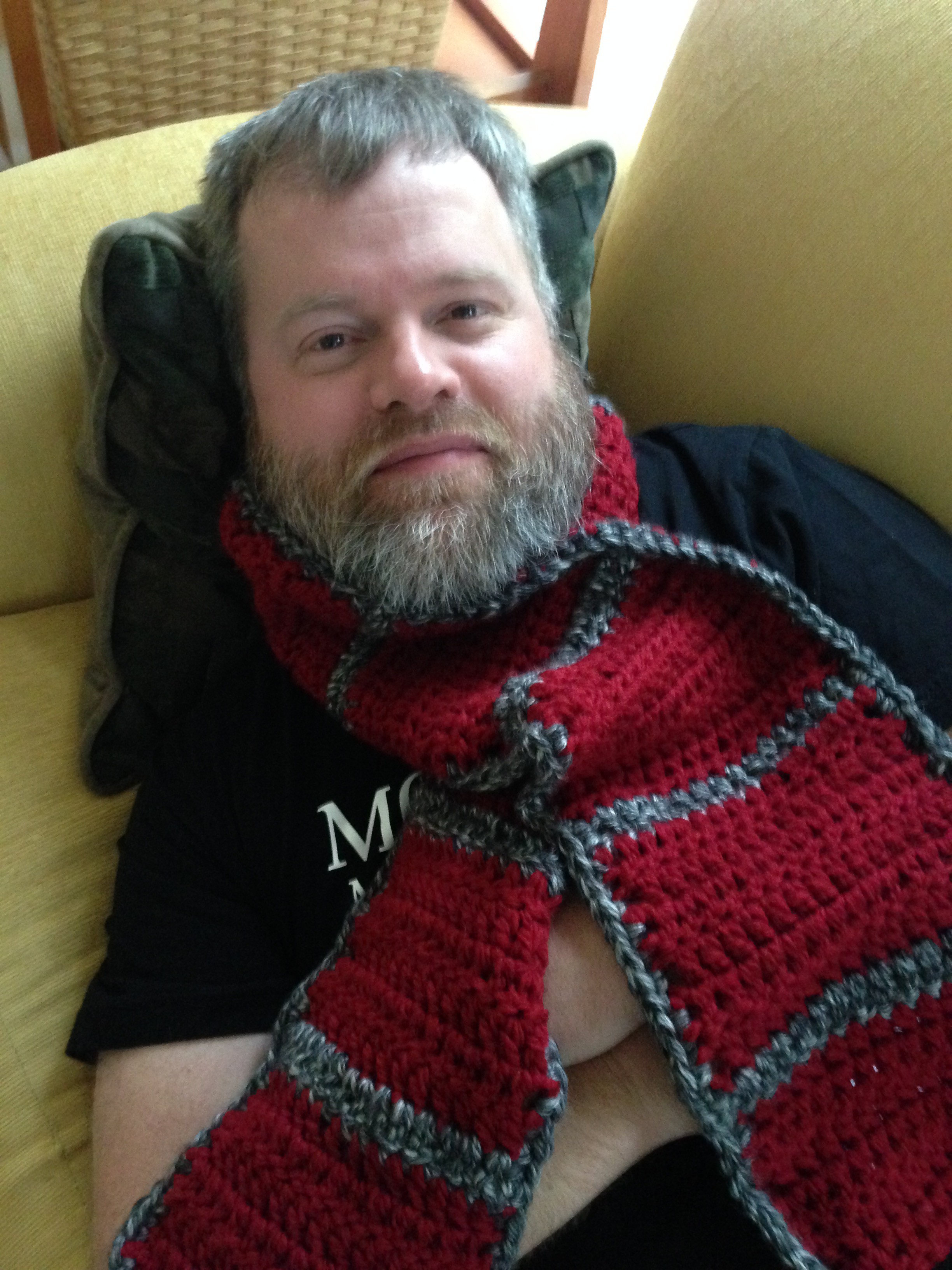 Look at that beard. Lordy. One of his friends says Rob is now “lumbersexual.” I just call him Grizzly Adams. HA! I asked him to grow it long enough to braid, then get an undercut so he’ll look just like that guy on Vikings. Double-HA!! (Also, rar!)

I also made a scarf for Veronica’s third-grade teacher, in this case an infinity scarf. The picture doesn’t do it justice, I thought it was gorgeous if I do say so: 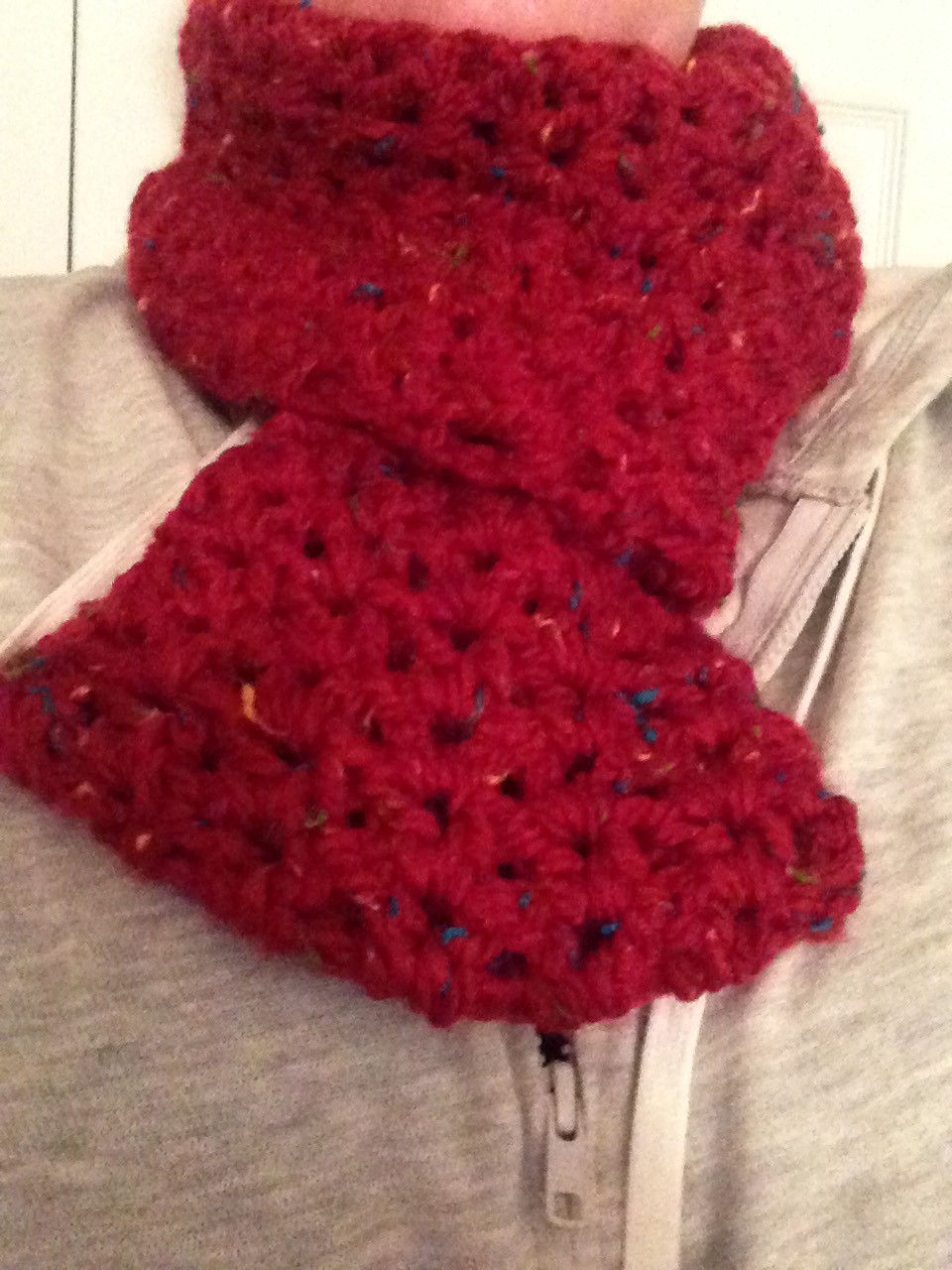 For my best friend, The Kimster, I made an afghan that SHE can use while watching TV: 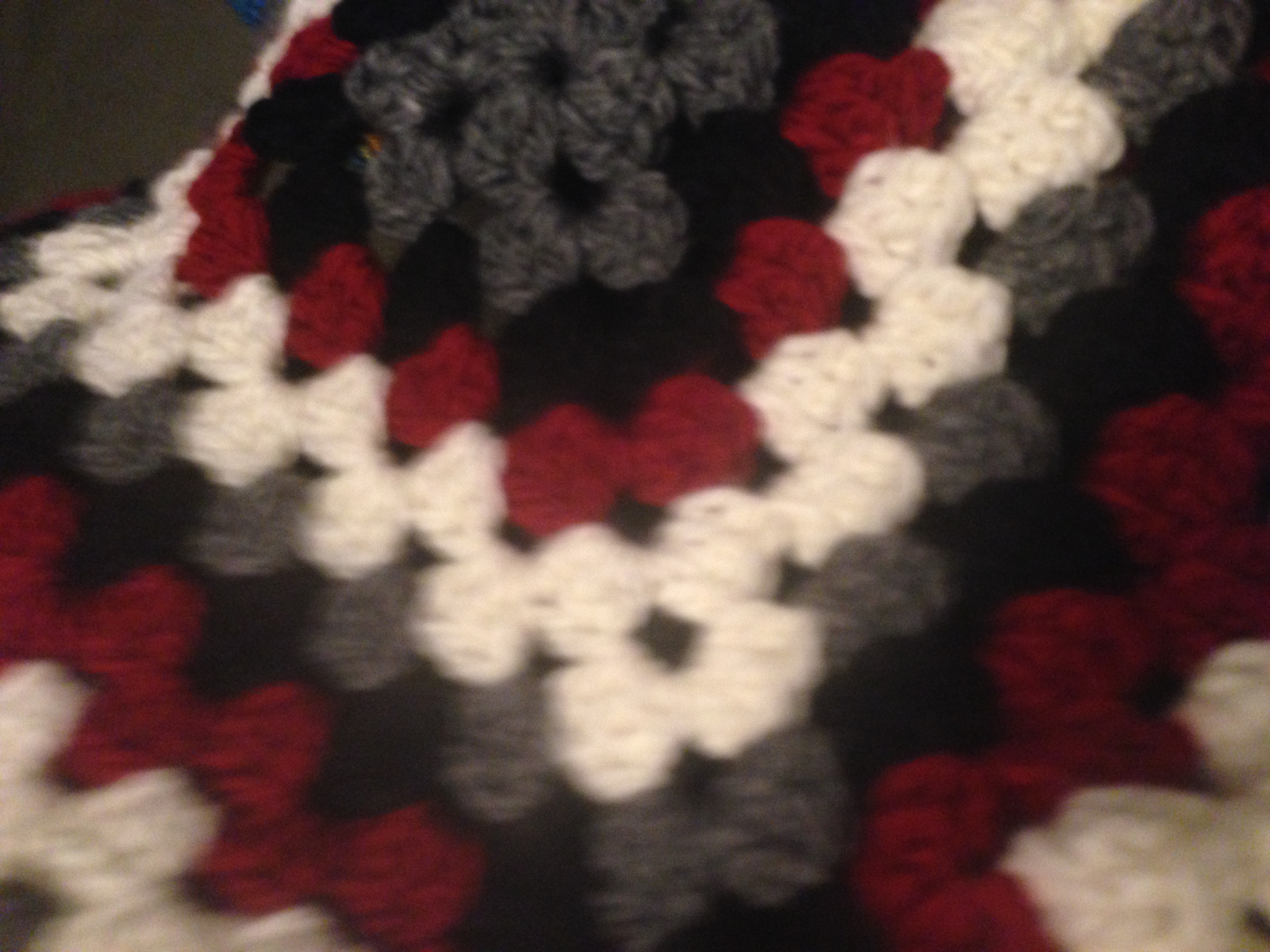 This was also made with chunky yarn in one of my favorite afghan patterns. It’s super easy, basically just a gigantic granny square. You keep going in rounds until it’s as big as you want. I have made two of them previously; one or my niece and one for Veronica, in rainbow shades. On this one I stuck two four colors I knew she’d like and did one or two rows of each until it was the right size, then added a border of 1 row double crochet, then 1 row single crochet.

My manager at work is an old friend of mine. I made her a basket, which I filled with chocolate, lip balm, and a pretty cowl and hat (which I also made): 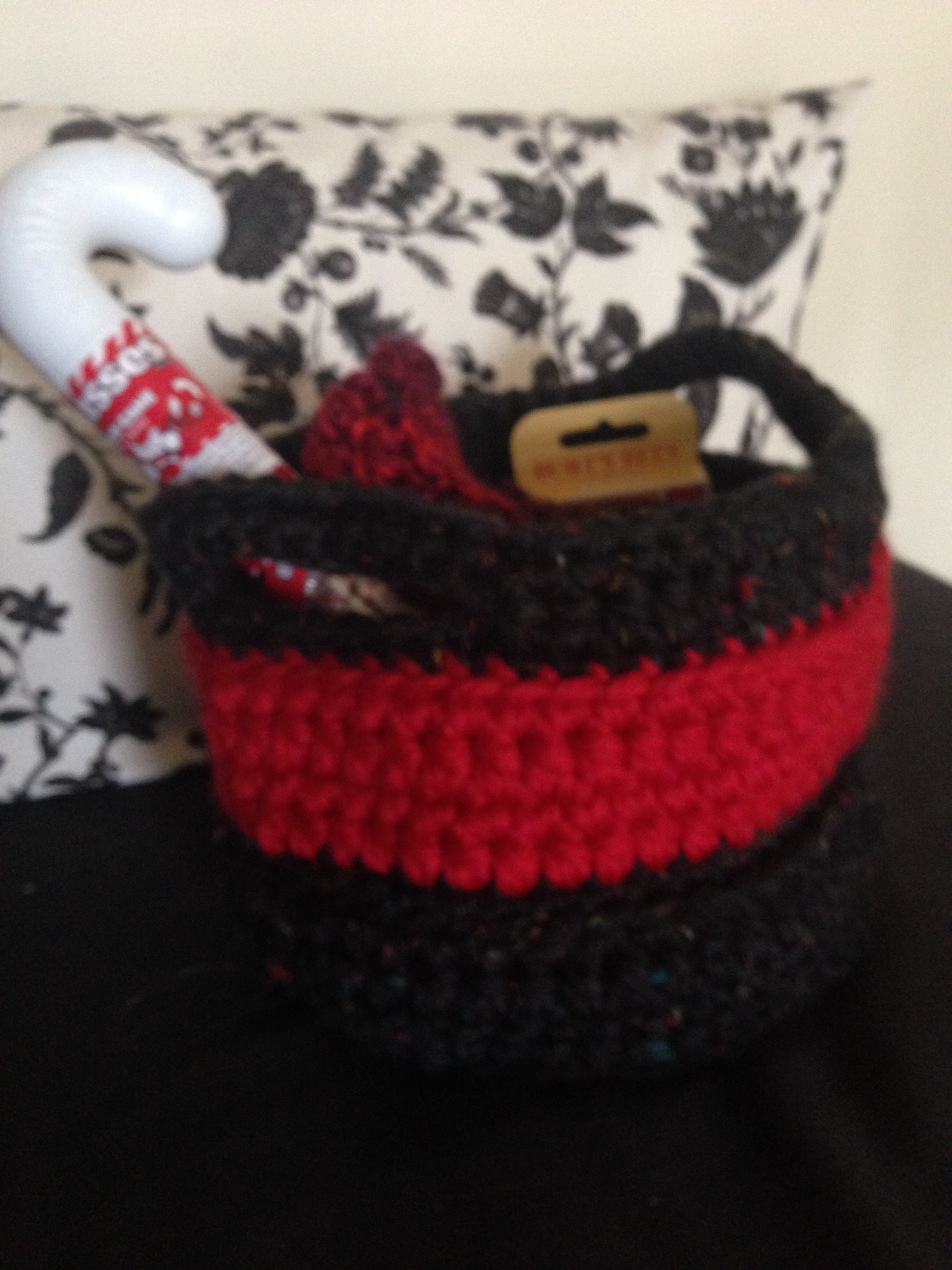 That basket was kind of a bitch. You use super bulky yarn with only a 10mm hook AND you hold two strands together, in order to get a nice, tight weave so that the basket will stand up on its own. It worked, but it was tough on my hands. I was planning to make another one, maybe bigger, for holding yarn and stuff but my knuckles started crying so I decided eh, maybe not.

And FINALLY, I had to make something for myself, so I made a new afghan for napping. Here’s Chandler modeling it for us: 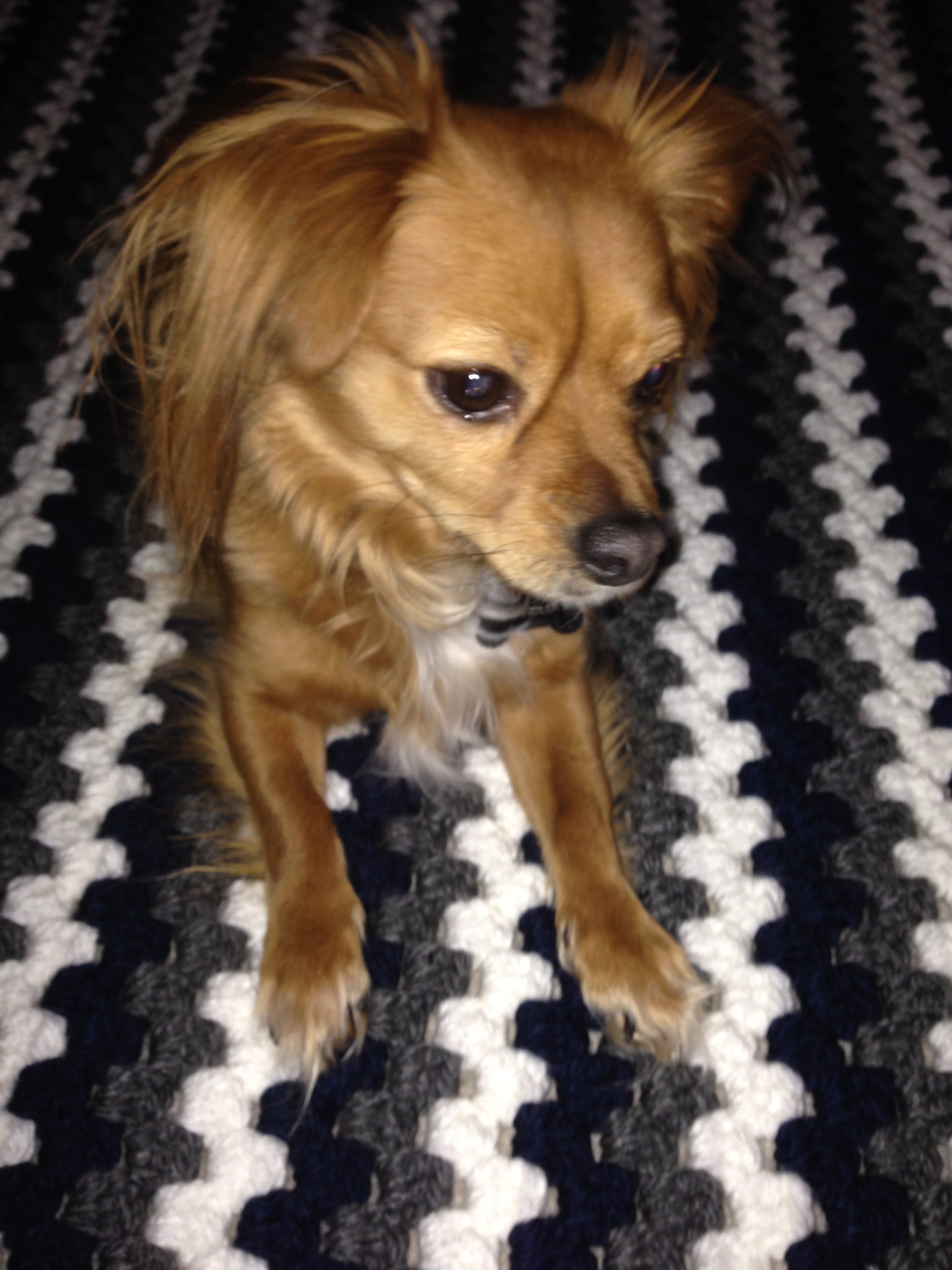 This is the fantastic Granny Stripe pattern by Lucy at Attic24, one of my favorite crafty blogs. In this case, I made it in bulky yarn so it worked up very quickly. I also have a version in many colors of standard worsted weight that I’ve been working on off and on for months now. Who knows if I’ll ever finish? It’s a nice project to work on while watching TV or having a conversation with someone because it’s so straightforward. At first the edges used to trip me up a bit but I’ve done so many now that I could probably do it in my sleep.

I’ve got plenty of other things on the way. I’m just finishing up a corner to corner throw that I decided to make for my car. Do you have this weird issue in the car with the heating? The foot blowers do a good job keeping my feet warm, and the upper blowers can warm my hands, face, etc. It’s the part in between, my lap actually, like my legs from my knees to my hips, that doesn’t get a blower and is always COLD COLD COLD. So I’m making a lap throw to put on my lap (duh!) in the car. Pictures when I finish.

Have a great weekend!

From Patton’s twitter feed just now (start at the bottom and read up): 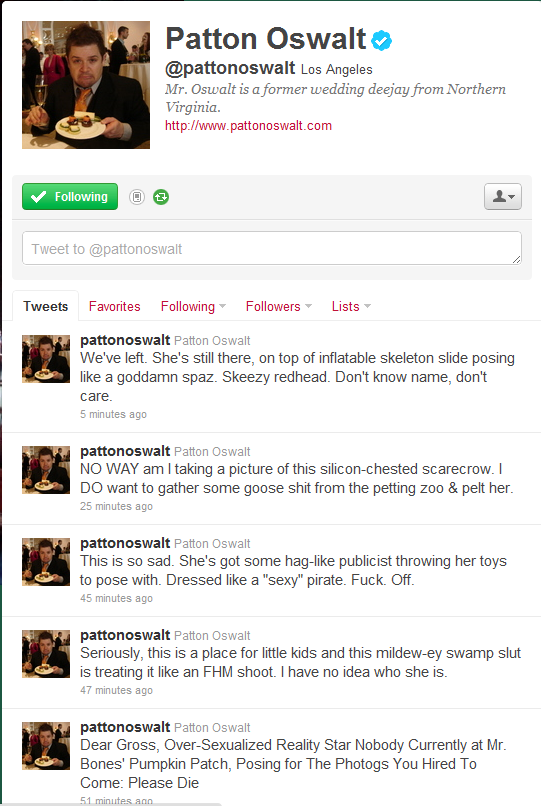 Boy, that Courtney Stodden really gets around, huh?

So WordPress is nagging me that there’s a new version available, and two of my plugins need updating, and am I getting right on it and taking care of that? No!! I mean I’ll do it…eventually. Like posting. I do it…eventually.

It’s not that I purposely make a post and then wait nearly a whole freaking month to make another one. It just happens, you know? Just like that periodontist my dentist referred me to back in oh…November? December? I dunno. I’ll make an appointment eventually.

In the meantime there is lots of stuff happening. Like: I’m starting a new job this month! And, therefore, leaving my old one! YAY! And I’m planning the Bean’s birthday party! And I’m dealing with passive-aggressive persons who seem hell-bent on bringing me down! And I have approximately five million errands and odd jobs to do during the week between jobs that I have PROMISED myself to take this time.

(I’ve never had time off between jobs before. I wanted to try it at least once.)

So, longer post later. This is just to assure the three of you out there that I haven’t forgotten this blog, or you. Let me direct you to this old post of mine about how to clean your sterling silver jewelry. It worked back then (2009) and I just used it again this weekend – guess what? It still works! YAY! 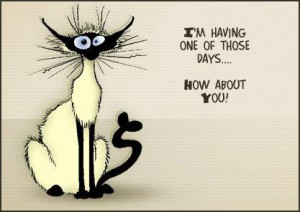 (Thanks Vauxhall Vixens for showing me this image. Perfect.)

For those who wonder why it’s worthwhile to read the ridiculous, old-fashioned “soap” comic strips like Mary Worth, Judge Parker, Apartment 3-G, etc. – here’s your answer. Every now and then you get a strip like this, featuring perhaps the most inappropriately and comically understated reaction to one’s supposed “friend” ruining one’s wedding rehearsal dinner ever, in the history of comics, rehearsal dinners, and understated reactions. I mean this – THIS is priceless. Thank you, Karen Moy. Though I’m not quite sure how Jill got so drunk off a bottle of ketchup.