There are lots of possible answers to the question, “Who is your favorite founding father?” Look at all the possibilities! There are so many cool dudes to choose from. For anyone who’d paid any attention in US History at all, it would be pretty easy to pick one of the “founding fathers” at random and come up with a rationale. You might not even have to hold a strong conviction about it, it’s just kind of a gimme question, and easy to come with an answer. Assuming you’re not completely ignorant, that is.

For example! You could say any of the following:

Benjamin Franklin – because he was so cool and multi-talented. He had a great sense of humor, was an accomplished writer, and invented a bunch of nifty stuff like bifocals and the glass armonica! Remember Poor Richard? The stuff with the key and the kite and the lightning? That Franklin, what a card.

Thomas Jefferson – because he was a true renaissance man. Not only did he write the Declaration of Independence, a stirring and moving document; he was also an intellectual and a strong defender of religious freedom and the separation of church and state. He started a university, was a governor, president, vice president, and secretary of state. Dude stayed busy!

George Washington – what’s not to love? The dude was a war hero, and refused to be treated like a king when he became America’s first president. He was, in fact, one of America’s greatest presidents, according to scholars. Also: wooden teeth, which cracks me up (but couldn’t have been very comfortable); Mount Vernon; the dollar bill…

And that’s just three of them. If none of those struck your fancy, you could still choose from John Adams, Alexandar Hamilton, James Madison, and John Jay (source).

What I’m saying here is, if you were asked “Who is your favorite founding father of the United States,” and you couldn’t think of someone right off the top of your head, or you had to give some lame non-answer like, “All of them,” it would demonstrate a real ignorance – evidence of the fact that you had never given it much (or any) thought. One might assume that you were kind of clueless about history and other intellectual matters. One might assume you were so absorbed with yourself, you didn’t care about people from long ago who lived and died making our country the great bastion of freedom that it is today. One might think.

I’m getting really sick of seeing these weirdo protesters at town hall meetings waving pictures of President Obama with a Hitler mustache. They’re only doing this to provoke a strong reaction, though I personally believe some of them really are that ignorant – to compare the President to Hitler on any level is ludicrous. Rational people understand this. Of course, rational people understand what fascism actually means, as well as socialism, democracy, etc., etc.

But anyway! I’ve slapped together these counter-protest images for your use. They are horrible, I admit – offensive and inappropriate, and that’s just my photo editing skills! But what do you expect, all I got here is Paint.net, I’m not very coordinated, and I did the best I could. Enjoy! 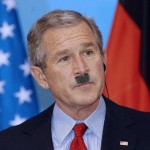 The ol' monkey boy himself 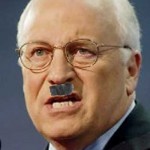 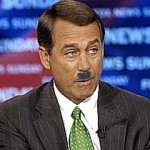 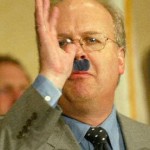 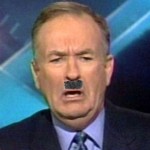 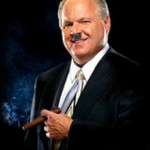 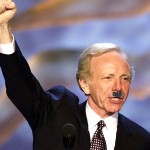 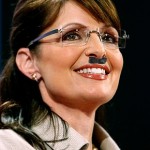 I had a long meeting/demo at work today, and as such, I knew I was going to have to dress up a little bit (no jeans, etc.). So I picked out my outfit last night, before I went to bed. It wasn’t until I listened to the news early this morning that learned wearing all black would be sadly appropriate, as Senator Ted Kennedy had died.

My thoughts and prayers are with his family, and I mourn with all Americans for a great senator and a wonderful human being. May he rest in peace.

A lot of people wanted to believe that when we elected our first black president, it signified the end of racism and racial division in this country.

You see, racism is alive and well. In fact, racism seems to just get more bold and blatant and “out there.” And I find it very, very discouraging. A few recent examples:

That last one really makes me feel sick. When people can’t even agree that an 11-year-old should be off-limits, there is something wrong with the world, or at least the wingnut corner of it. Sadly, the type of comments described are fairly typical of coverage of the First Family lately. I read a lot of blogs about Michelle Obama (including Michelle Obama Watch, East Wing Rules, and Mrs. O), and there are always plenty of haters that seem to pop up in comments. (Of course on major news sites and political blogs it’s even worse. Mostly I just have to ignore the comments section.) They call Mrs. Obama “ugly,” “arrogant,” “trashy,” and other adjectives that I don’t think any rational, non-frothing-at-the-mouth person could ever use to describe her.

Part of this is, I think, the problem of perception. People will see what they want to see. They don’t like the fact that a Democrat is president, and especially a black Democrat, and they lash out at President Obama and his family, however inappropriate that is. But I’m honestly shocked at the vitriol. For instance, I really really hated our last president. I thought he was a total douchebag and said so many, many times. But I never found any reason to criticize his wife (although to be honest I can’t imagine how a seemingly-nice lady like her ended up with a douchebag like him, but I digress). She did all of the things that Michelle Obama does – travelled with her husband, ran the social side of things at the White House, got involved with community service and charitable causes – but nobody seemed to have it in their hearts to call her ugly or trashy or arrogant. Believe me, I read Daily Kos regularly – nobody was picking on Laura Bush there.

So what’s different when it comes to Michelle, and by extension, her daughters? Michelle is not getting involved in anything political (at least not so far). Her activities have been wholly uncontroversial – planting and harvesting a kitchen garden with local elementary school students, visiting schools and daycare centers, travelling with the President and dressing and behaving in a tasteful and traditional way while she does it.

Is it because she’s black? I think when the First Familiy is referred to as “ghetto,” there’s really no other conclusion. And that makes me really, really sick.

Today, the President and his family toured Cape Coast Castle, a former slave port in Ghana. Speaking about why it was important for Malia and Sasha to see this site, he said:

“And hopefully one of the things that was imparted to them during this trip is their sense of obligation to fight oppression and cruelty wherever it appears and that any group of people who are degrading another group of people have to be fought against with whatever tools we have available to us.”

Apparently, there are a lot of people right here in the good ol’ US of A who still need to learn this lesson, Mr. President.

I’m so sick of all the “socialized medicine” fear-mongering being propagated by the right-wing, you-only-count-if-you’re-rich GOP dumbasses in this country. It makes me so sick, and so angry, I can’t really do an entire post about it because it will raise my blood pressure too much.

Here’s one example though. Douchebag-in-chief Michael Steele said this when he was (unsuccessfully!) running for the Senate in 2006:

“Who pays for universal health insurance? Who pays for socialized medicine? I don’t need government dictating to me when I go to the doctor, which doctor I go to, how much is going to be paid for my health care. That’s not the America I want to live in.”

Yeah, Michael. That sounds scary. Lucky for us that’s not the America we live in, huh? I mean, the government doesn’t dictate to me when I can go to the doctor, or which doctor, or how much will be paid. But unfortunately, you know who DOES decide all that? It’s not my doctor, and it’s not me.

(thanks to Politics Daily for inspiration)