So thanks to my friend Creeva, I realized I hadn’t posted in a WHILE. Sorry about that. (BTW I love Creeva’s new layout, it looks really slick.)

Anyway, yeah…what HAVE I been doing?

1. Working, which is still going really well.
2. Buying a whole new HVAC system (two new AC units, two new coils, two new furnaces). Was that expensive? YES.
3. Dealing with the vagaries of my daughter’s pre-school and summer school schedule. Real school starts in just a week! She’ll be in kindergarten (all day at the Montessori school though, not our public school’s weak-ass half-day thing).
4. Playing WoW occasionally (log in, do dailies, poke around a bit, maybe some crafting, reorganize bank, log out).
5. Playing Left 4 Dead 2 occasionally (log in, shoot a lot of zombies, get frustrated at lag on Steam servers, log out).
6. Catching up on various TV shows – this summer I’ve watched all of the currently available seasons of Parks & Recreation, Boardwalk Empire, Nurse Jackie, and Game of Thrones, plus I’ve caught up to the latest on True Blood. I watch almost all of these shows on my iPad, which ROCKS.
7. Reading. Here are all the books that I’ve read so far this summer:
– All three of the Hunger Games books by Suzanne Collins
– All five of the Song of Ice and Fire books by George R.R. Martin
– Dead Reckoning (the most recent Sookie Stackhouse novel) by Charlaine Harris
– Anno Dracula by Kim Newman (I understand this is part of a series too but can’t find the others on Kindle)
– Then Came You by Jennifer Weiner
– Full Dark, No Stars by Stephen King
– American Gods by Neil Gaiman
–  Eifelheim by Michael Flynn
– Already Dead by Charlie Huston (just started this actually)
I also started Pictures at a Revolution: Five Movies and the Birth of the New Hollywood by Mark Harris, but I just can’t get into it. The topic is interesting to me (American movie industry of the late 60s), but maybe it’s the prose? Anyway, it leaves me cold and I suspect I may not finish it.

I still have  a backlog of maybe 20 or so items in my Kindle that I want to read, so I’m not buying ANYTHING new until I’ve finished all of it. This will help me save some money too, which is a good thing (see that painfully expensive new HVAC system, noted above).

And that’s what I have been doing!

Prepare to receive my unsolicited opinion on Hulu Plus, Hulu’s $7.99 a month streaming service that is supposed to compete with Netflix:

My husband signed up for the one-week free trial, so we tried Hulu Plus out on our Roku. I was NOT impressed. The interface, compared to Netflix and even Amazon VOD, is clunky. But most annoying were the commercials. TONS OF COMMERCIALS. I tried to watch an episode of Parks and Recreation (Season 3, Episode 1), and before the damn episode even started, I had to watch FOUR commercials. Two straight minutes of irritation right there (at least when I’m watching something with commercials on my computer, I can do other things and ignore them until they’re over). Then there were another two commercials at every normal commercial break in the program.

I guess I’ve gotten spoiled by Netflix, where there are NO commercials at all, but watching an episode on Hulu Plus was so annoying, before it was over I’d decided I would never do it again. $7.99 a month to watch commercials? NO THANKS. For $7.99 a month I can stream shows and movies from Netflix with no commercials, and for $2 more I can have one DVD out at a time too. Yeah, I get that Hulu Plus can offer more recent seasons, but so what? I’m pretty sure Season 3 of P&R will be on Netflix Streaming by this fall when it comes out on DVD. If not, I’ll just get the DVDs as part of my 1 DVD at a time plan. Or I’ll pay $38.99 and stream Season 3 in HD right now from Amazon VOD. It is worth it to me to watch without annoying commercials.

So my summary of Hulu Plus is: TOTAL WASTE OF MONEY.

(By the way, if you have no idea what a Roku is, you really need check it out. IT ROCKS.)

A few weeks ago (honestly I can’t really remember how long ago it was) I was forced to endure a portion of Nickelodeon’s “Kids Choice Awards.” Oh. My. God. It was truly awful. It was without a doubt the most horrible thing I can remember watching on TV in…well, ever. In particular, it started with a performance by the Black-eyed Peas. WTF?! Why are these bozos still allowed on TV? Wasn’t the Superbowl half time thing enough proof that these morons should be illegal? All they do is take other people’s songs and make them worse. That Fergie reminds me of something a British friend of mine once said: “She has a face like a workman’s bench.” Make of that what you will. I love my daughter, but I will never suffer through BEP again, even for her.

Anyway, I had 53 hours at work last week, including hours on Saturday and Sunday, so that’s why I’m exhausted. I guess you could say I’m over it. 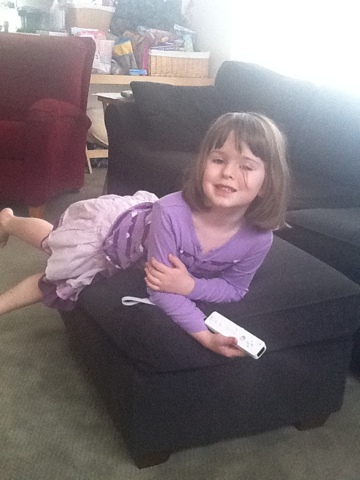 Jay Leno is not funny. In addition, he’s kind of a smug asshole!

Here’s a list of all the late night hosts I would rather watch than Jay Leno:

…and probably a few others that I just can’t think of right now. In summary, I don’t watch Leno and I never will.

…to how dumb people are. In general, of course, but specifically, people who are trying to sell their homes. Or at least that’s the impression you get if you watch some of these HGTV shows like “Get It Sold.”

I mean, just for an example, I saw an episode the other day about a woman with a fairly standard townhome that had been on the market for 90 days with no offers and very little interest. She could not understand why! (Der! Duh!) Not surprisingly, she was way overpriced – she was asking more for her rundown center unit than a brand-new end unit was going for in the same subdivision. For that I blame her agent – a good agent should always keep up to date on your comparables, and help you set a competitive price. But why her agent never said anything to her about the HORRIBLE shape her house was in, I have no idea.

The front yard was full of weeds (no curb appeal); the house itself was full of temporary furniture (like folding tables), half-packed boxes, weird decorating choices, and tons of clutter; and the deck (which should have been a big selling point) was dirty and cluttered with garbage.

Well gee…I wonder why nobody wanted to even make a low-ball offer on your busted-ass mess of a house!

Sadly, this woman was very typical, and I say this from experience – I’ve known people who tried to sell a house and made some of the very same idiotic mistakes. And goodness news my husband and I looked at plenty of hot messes when we were looking to move up from our own townhome to the single family where we live now. Lucky for the woman on the show, a professional intervened and helped her not only set a reasonable price, but fix some of the crazy decor and messy non-staging that was going on.

Here’s a handy guide to what stupid people say about their messy houses, and what it really means:

“The house has character.” Translation: my house is full of broken shit, and I don’t want to spend the time/effort/money to fix it because I’m hoping you’ll buy my problems when you buy my house.

“I don’t want it to seem cold.” Translation: I don’t understand that seeing lots of personal photos and chotchkes turns people off. I’m too lazy or stupid to clear away my personal clutter and stage the house to look attractive to strangers. (Seriously – people don’t seem to get this at all. For better or worse, buyers have become conditioned by looking at lots of model homes to houses that are well-decorated but NOT covered in personal photos and artwork. Appeal to them!)

“I think buyers want to see a house that looks lived-in.” Translation: I’m too lazy to clean this place up. Guess what, Einstein? People do not look at YOUR clutter and imagine themselves living amongst it. They want to look at a house that is clean, tasteful, and uncluttered – because THEN they can imagine themselves moving in.

I’m just glad that a.) I’m not in the market to buy a house and b.) I’m not trying to sell my own house! I’d probably go insane!